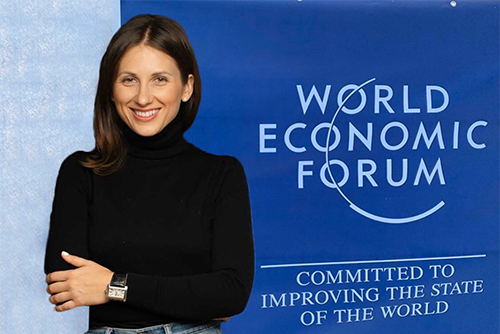 Earlier in January, a small picturesque village of Davos in Switzerland hosted the 50th World Economic Forum (“WEF”) and transformed into a hub, where global leaders discussed politics, economy and the latest advancements in technology, including blockchain, that can foster a sustainable future.

Our partner, Rika Khurdayan, visited Davos during the World Economic Forum and shared a few main takeaways from WEF 2020 in the context of digital finance and blockchain technology.

Digital economy and the future of digital payments was one of the focal points during the forum. Klaus Schwab, the Founder and Executive Chairman of the WEF, said:

“Digital currency, a cross-cutting topic that requires input across sectors, functions, and geographies, is a key area of interest for the Forum”.

Various experts discussed whether central banks or private companies, like Facebook and its project Libra, will take a leading role in the digital transformation of the global financial system. The consensus was that 2020 may very well be the year that we see a global digital currency. Whether it will be retail currency or central bank-backed remains to be seen.

WEF announced the establishment of the global consortium for governing and regulating digital currencies, including stablecoins.

Lack of consistent regulations and treatment of digital assets by government agencies remains the major impediment to developing a truly global digital currency. As such, the consortium, consisting of academics, traditional financial institutions, government organizations and private enterprises, will focus on developing global transparent, inclusive and interoperable framework for regulating digital currencies.

“Building on our long history of public-private cooperation, we hope that hosting this consortium will catalyze the conversations necessary to inform a robust framework of governance for global digital currencies,”

said Klaus Schwab during the forum.

Central banks have long been observing the cryptocurrency space and researching potential development of CBDC. This year, WEF and the Centre for the Fourth Industrial Revolution issued a toolkit covering retail, wholesale and hybrid CBDC. Over 40 banks, financial institutions and researchers joined forced to develop the framework for evaluation and potential deployment of CBDC.

In addition,  the European Union and five major central banks in the United Kingdom, Canada, Sweden, Japan and Switzerland announced they were teaming up to access potential uses for central bank digital currencies.

“Given the critical roles central banks play in the global economy, any central bank digital currency implementation, including potentially with blockchain technology, will have a profound impact domestically and internationally,”

This comes as no surprise – central banks worldwide have recently taken a keen interest in developing CBDC. Late in 2019, Christine Lagarde, the president of the European Central Bank (ECB), urged ECB to take a leading position in developing CBDC and stressed the need for efficient and low-cost payments worldwide. Likewise, the People’s Bank of China (PBOC) has been working on developing and deploying CBDC since 2014 and recently announced that it is preparing to launch pilots for its digital currencies in 2020 in two major cities in China.

Tokenization – from Token Assets to a Token Economy:

A captivating discussion “From Token Assets to Token Economy” was held between Jeremy Allaire, CEO of Circle, and Neha Narula, Director of the Digital Currency Initiative in the MIT Media Lab, as part of official WEF program. What does it mean to tokenize an asset? How can tokenization make assets more liquid without creating additional risk? What drives tokenization? These were the questions addressed during the forum.

Allaire talked about various use cases for tokenization, from tokenization in its simplest form – like tokenized dollar – to new hybrid instruments, like the first tokenized carbon credits exchange recently launched in Australia.

Drawing an interesting analogy, he compared capital markets to the world of digital commerce. Though hard to imagine many years ago, today, we take for granted the ability to go on a platform, order an item and have it shipped across the world, without the buyer and seller ever knowing each other. Risk, reputation and logistical systems made this possible in the world of commerce, according to Allaire. And while we have capital markets today – the ability to access capital is very limited. The promise of tokenization is to democratize access to capital and ownership and create capital markets that are as open and global as those in commerce or transportation.

Narula drew a distinction between holding a traditional asset versus a tokenized one:

“This is a little bit different than holding it through your bank or a trading firm like Etrade or Fidelity or Charles Schwab. It’s a digitized version of that asset, and as such it’s wrapped in this programmable layer, and we can build really interesting applications on top of that”.

While enthusiastic about tokenization, she emphasized the need for regulation and consumer protection.

Consistent with the WEF’s general atmosphere of taking digital assets mainstream, Ripple CEO Brad Garlinghouse hinted that the company may be looking at an IPO soon. As he predicted that many blockchain companies will go through IPO this year, he noted:

This could be a major push in the blockchain space. So far, blockchain companies have mostly taken advantage of private placement exemptions under Regulation D and Regulation S in the US, or conducted ICOs outside of the US. The closest to an IPO were two Regulation A+ projects qualified by the SEC in mid-2019 – Blockstack and YouNow (Props Token).

Regulation A+ allows issuers to raise up to $50 million annually from both accredited and non-accredited investors, in exchange for preparing and following slightly relaxed public company-like disclosures. For these reasons, Regulation A+ offering is often referred to as a mini-IPO.

Sustainability was the heart of the WEF agenda this year, with sustainable development goals being addressed across industries – from food and natural resources to finance and fashion. Yet, it was hard to find a panel on sustainability during the forum without mentioning of blockchain technology.  By far the biggest topic of discussion was the use of blockchain technology in supply chains and the benefits it can provide: traceability, transparency and trust.

According to experts, blockchain technology can help mitigate the environmental, social and economic risks posed by supply chain networks worldwide. Certain industries, like fashion, urgently require innovation to address and mitigate the well-documented negative impacts. Use of technologies disrupting old economic models can drive the much-needed change and innovation, from traceability in supply chains to new business models.

Digital economy and blockchain has taken center stage during the World Economic Forum in Davos. But what prevents global proliferation of digital assets? Experts across industries agree that current regulation remains the greatest impediment to widespread adoption of cryptocurrency. The regulatory regimes governing digital assets are very siloed and country-specific. Adopting a global approach to regulating such assets will be a key push to proliferation of digital assets, access to capital markets and, possibly, more sustainable economy.  And the first jurisdictions to embrace blockchain and digital economy will reap the benefits of economic growth and development.

Ending with the famous words of Christopher Giancarlo, the former Chair of the Commodity Futures Trading Commission (CFTC) – “We sent a man to the moon. We can send the dollar to cyberspace”. And there is no doubt after attending WEF 2020.

This article by Rika Khurdayan was originally published by ChainDD Inc. on February 1, 2020 on ChainDD website.